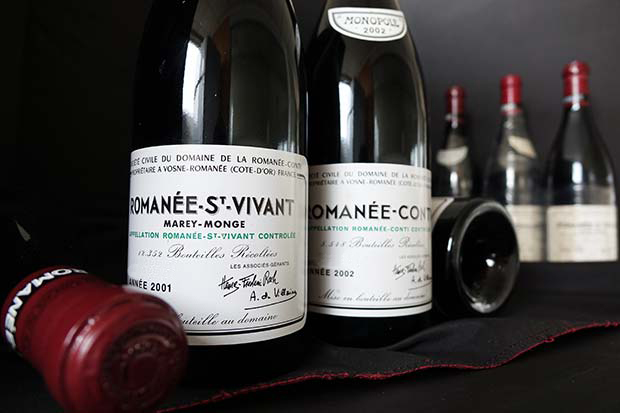 The French public auction regulation authority, the CVV (Conseil des ventes volontaires), has recently ranked iDealwine first French auction house. It is now time for us to reveal the 50 most expensive lots and bottles sold at auction. Brief description of this (very) positive report.

Since 1st January, 14 auctions took place on iDealwine platform, with more than 56,000 bottles sold. During these six months, not only have Bordeaux and Burgundy concentrated the largest volume of auctions (68% of the lots sold), but they both literally won the highest bids, with Bordeaux in pole position (58%).

Domaine de la Romanée-Conti is unsurprisingly at the top of this list with a 6-bottle lot of 2012 (a bottle of Romance-Conti, two La-Tâche, a Richebourg, an Echézeaux, a Romanée-Saint-Vivant) bought by a French amateur for €19,320. In all, a dozen of lots from the same domain, vintages going from 1980 to 2004, lead the auctions with amazing bids, thanks particularly, to the recent sale of a private collection of a young amateur from Luxembourg. The wines from Leroy, Henri Jayer and Armand Rousseau also have their fair share in this ranking and are the main features of Burgundy.

While single bottles attract bidders for Burgundy wines, several wine cases gathered Bordeaux amateurs’ interest. Unsurprisingly, the Grands Crus Classés, mainly from Bordeaux left bank, are omnipresent with a remarkable success for the Mouton, Petrus and Lafite, all three in the top 5 most expensive lots. For instance, Mouton is second of the global ranking with the sale of a twelve-bottle case auctioned at €17,640 in vintage 2000 (+11% compared to starting bid).

Concerning the most expensive auctions of single bottles, the ranking is a little more eclectic: besides Bordeaux and Burgundy, Rhone and Champagne are also part of it.

As mentioned earlier, other regions are emerging. The 1959 cuvée from Salon auctioned at €3,480 puts Champagne in the spotlight and the Rhône valley is represented by Jean-Louis Chave Hermitage Cathelin 1998. The latter went under the hammer for €3,000. Like last year, a spirit stands out. This time, it was not a whisky, but a Cognac: a magnum of Delamain Grande Champagne 1893.

These rankings show once again how international our sales are, with auctions from all over the world: Hong Kong, Europe, and the USA.  You all wanted to take part in these auctions to own one of these treasures. The next few months will tell us if other trends emerge, changing this ranking. For now, you can count on us to find dream bottles for you to bid!

BFM Business Interview | Does wine have a place in the world of NFTs?

BFM Business interview | Is there a bubble in the fine wine market?