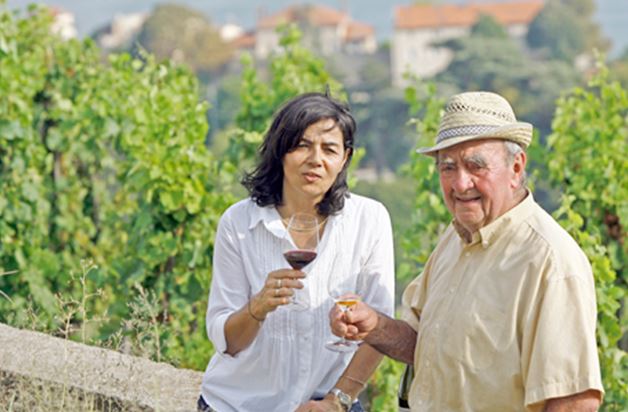 The wine industry was  recently saddened to learn of the death of Georges Vernay. Fondly known as the “Pope of Condrieu” he was a tireless advocate of the Viognier grape and fought throughout his life to promote wines from a village abandoned by producers after the war.

“I preferred the wines from the slopes to those from the plains which I thought were mediocre” Georges Vernay stated last November. It wasn’t that long ago in fact that wine from the Rhône Valley was sold in bulk, and producers in the Côte-Rôtie and Condrieu relied on apricot plantations rather than vines to make a living. In these circumstances, the steep slopes of the Condrieu appellation area (which was officially recognised in 1944) were gradually deserted in favour of the more machine-friendly plains. By 1960, there were just six hectares of vineyards on the slopes of the AOC, but Georges Vernay persisted. He had taken over the reins of his father’s estate in the early 1950s and successfully convinced other winegrowers to follow his lead while waiting for better days.

Through intuition, Georges Vernay kept on tending the vines on the stony terraces known as chaillées, or more aptly chaillées de l’enfer (terraces of hell). On this terrain, the sun beats down all summer, and people are needed to work each hectare of vines, whereas on the plain, tractors can be used. But the better days did come in the end – for the entire region. Credit for this should go primarily to Marcel Guigal, a formidable ambassador for wines from the Rhône.

The appellation currently boasts 190 hectares of vines and produces wines that are sought after all over the globe. It is easy to forget now that it owes its survival to the perseverance and talent of Georges Vernay. In 1996, Christine Vernay joined her father and began a new page in the family history book. Christine manages 17 hectares, including seven in Condrieu, and has turned out to be an excellent winemaker. Through her, the dazzling style and all the finesse of wines produced by the estate live on. Coteau de Vernon, planted by Francis, the father of Georges Vernay, now produces one of the finest white wines in the world.

Family and friends will be sharing a last glass in honour of the great man at Vernon. The powerful and genuine emotion expressed in response to this sad news is testimony to the significance of George’s Vernay’s work. The iDealwine team would like to offer Christine Vernay, her family, and the team at the estate, their sincere condolences and hopes she will continue in the role she has fulfilled with so much talent for the last 20 years at the head of the domaine.

See wines from the Rhone currently on sale