The iDealwine indices recorded a strong performance in April, largely boosted by the weak euro. The iDealwine 100 indice rose by 2.23%, owing much of its growth to the global demand for Burgundy, which increased by 3.10%. 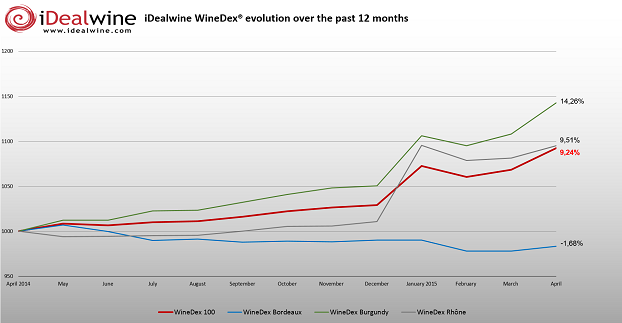 The prices recorded on auction in April were boosted by Burgundy, with the regional iDealwine Burgundy indice appreciating by 3.10% during this period. Some bottles recorded price jumps of 80%, both for reds – including the Chambertins of mature vintages of the 1980s – and whites, for example Meursault Perrière of Coche-Dury. In fact, Burgundy wines achieved an increase of 14.26% over the last 12 months!

In April, the price of Bordeaux wines slightly recovered, with the regional indices iDealwinerising by 0.53% for the month. Two factors contributed to this: the currency effect and the success of Pomerol’s star, Petrus. Note, however, that the price evolution of these wines remain negative over the last year.

The Rhône Valley is also on the rise, with an increase of 1.28% for iDealwine Rhône indice. Again, the attractiveness of the euro undoubtedly played a role, since Asian and American buyers battled each other to acquire the wines of Côte-Rôtie (mainly Jamet, but also La Turque of Guigal), magnums of Hermitage La Chapelle 1985 and Châteauneuf wines from Château Rayas.

iDealwine WineDex® outperforms CAC40 at the end of summer

A thirst for Rhône

April WineDex® indices boosted by the Rhône and Burgundy