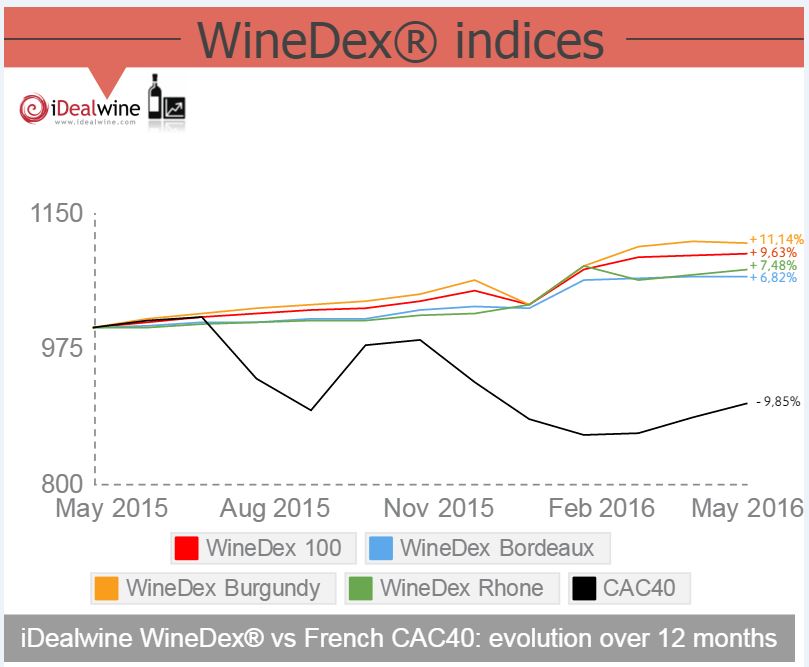 iDealwine’s iDealwine indices recorded a token increase of 0.11% in May, taking their performance since the beginning of 2016 to 4.60%. The month of May saw a slight fall in the prices of wines from Burgundy.

It may well be a one-off, but in May wines from Burgundy experienced something of a quiet spell in terms of auction prices. Having long been the main driver of growth in the iDealwine wine indices, they fell back slightly during May. The fall may have been tiny (-0.02%), but it contrasts sharply with the trends noted previously. Should this be taken as a sign that these wines have reached their peak in terms of price? It is a little early to say, since the scarcity of wines available for sale means demand, which today is on a global level, will always be there. Take the Chambolle Musigny Les Amoureuses 2012 from the Georges Roumier estate, for example. The price of this premier cru, which has been steadily advancing, came in at €1200 at the latest iDealwine auction (25 May 2016), an increase of 19% on the previous sale. The same trend is in evidence for the Bonnes Mares from the same domaine (+9% to €840 for the 2009 and +8% to €840 as well for the 2010). On the other hand, in May, there were signs of the same kind of stabilisation at an even higher level, with the wines from the Romanée Conti estate. Above a certain price threshold the market comes to a standstill, a trend which could have a knock-on effect across the entire spectrum of Burgundy wines, with the added risk that wine connoisseurs might switch their attention to other regions.

The Rhône valley proved particularly dynamic during May, buoyed by sustained demand for the big names from the north of the region (Jaboulet and Chave in Hermitage, Jamet and Gentaz-Dervieux in Côte-Rôtie). In the south, Château Rayas is still the top performer in Châteauneuf, including in the smaller vintages such as 2008 (€360, +36%). The Réserve des Célestins label from the Henri Bonneau estate also put in a strong performance (€384 for the 2001, +34%). All in all, the iDealwine Rhône indice index registered a gain of 0.53% last month.

As for the Bordeaux, although the regional indices iDealwineshowed an increase of “only” 0.24%, some great results were noted for the 2005 vintage (Léoville Barton at €114, +6%, Léoville Poyferré €102, +6%). So the overall trend is still positive for the wines that make up the iDealwine iDealwine indices, with a gain of 4.60% since the beginning of the year, and as much as 9.63% for the last twelve months.