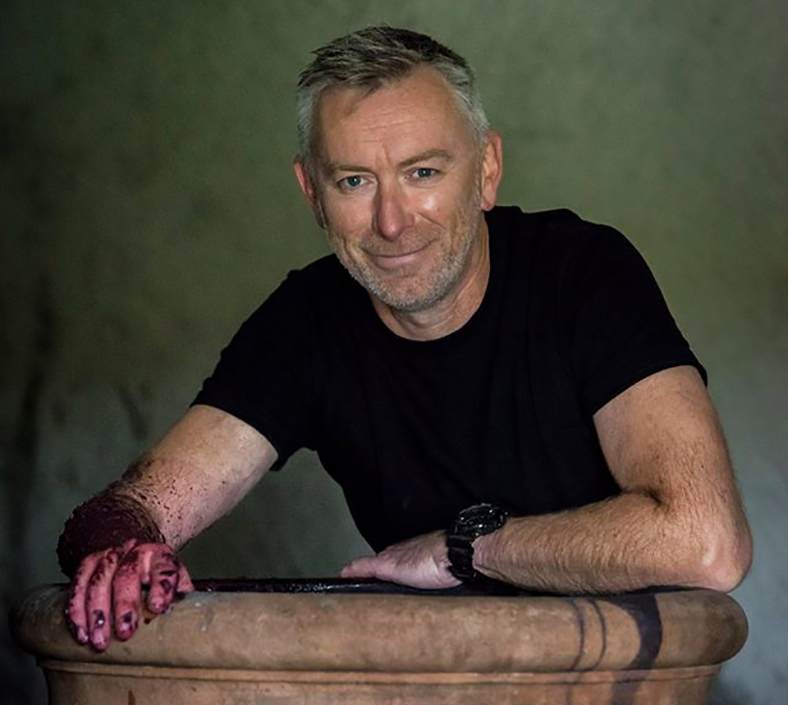 The Muscadet region has been growing in renown over recent years thanks to talented and engaged wine makers producing fine, terroir wines. Today, we’re introducing you to Domaine de l’Ecu, a property run by Frédéric Niger Van Herck, a biodynamics enthusiast who we were lucky enough to have a chat with.

Guy Bossard is a name close to the heart of Domaine de l’Ecu. Although he sold the domain in 2010, Guy was the one to bring an end to the use of chemical products in the 1970s. At a time when many of his neighbours were being quite liberal with chemicals, this wine maker chose a path that has become well-trodden over time. Far from the first in his family to pursue this career, Guy obtained the ‘organic certificate’ (as it was then) in 1975, open more to ridicule than accolades at the time. He found an interest in biodynamics in 1992, seeking the Demeter certification he would go on to receive in 1998. Now, he is proud of the work accomplished and the lively earth he has cultivated, keen to show this to his visitors.

Frédéric Niger Van Herck, on the other hand, doesn’t have a traditional background in wine. Studying law and criminal sciences doesn’t naturally lend itself to a career in the vineyard. It wasn’t until he reached his forties that the lightbulb moment came: passionate about wine from a young age, his life should be spent in the vines. “I remember this moment vividly; I was reading a book about malolactic fermentation and it was getting close to midnight. That’s when I decided everything was going to change,” Frédéric tells us. At this stage, he wasn’t building entirely from scratch, being a self-confessed ‘wine-geek’ who wrote a blog on the subject, led tasting sessions and visited vineyards in order to establish relationships that remain important to him to this day. He had even put together an impressive wine cellar, treasure trove of 8,000 bottles no less! “For me, it’s vital to love wine and to have tasted plenty of it in order to make it. For example, you have to try a wine from Emmanuel Reynaud or Olivier Humbrecht at least once. Olivier has inspired me a lot with his knowledge and his humility. Tasting as much wine as possible allows you to really absorb the essence of it.”

He ended up selling his business share to pursue a diploma in oenology. It was during this time that Guy Brossard was seeking a successor for Domaine de l’Ecu, just a stone’s throw away from Fred’s place. It was, of course, only natural that their paths should cross.

Guy therefore sold the domain to Frédéric in 2010, though they worked side by side for several years after this. And the longstanding Brossard methods were passed on with great pride: massal selection (a more genetically-diverse way of planting vines), grapes harvested by hand, indigenous yeasts, plowed earth. The wines have a minimal dose of sulphur added (around 40 mg/L), half as much as the limit imposed by the Demeter standard. Today Frédéric has made a name for himself and can undoubtedly stake his claim as a master of Muscadet.

The 24-hectare vineyard has been grown organically and biodynamically for a long time now, but Frédéric has really pushed his working methods, altering tradition where he deems it necessary. He doesn’t necessarily use the same biodynamic preparations as his predecessor, working with essential oils, mother tinctures (hydro-alcoholic extracts obtained by macerating fresh plants and diluting them homeopathically), water memory (homeopathic principle) and vibrations (using the bovis rate, energy frequencies attributed to each element). And all of this whilst retaining a bit of copper and sulphur since “we’re in an oceanic climate after all”. Frédéric recognises the importance of his predecessor’s work. “The fact that I can make the wines I make today is also thanks to him, particularly in terms of organics and biodynamics. He was really a pioneer of the movement, ahead of everyone else. The aspects that I’ve developed with amphora and a focus on energy still have Guy’s work as their base.”

When it comes to organics, biodynamics and natural vinification, you might have a general idea of what the idea is. But what on earth is cosmoculture? Well, this is a method that Alain and Philippe Viret (from the Rhône) have been advocating for since the 1990s to complement organic and biodynamic principles. This method is based on ‘bioenergetics’, a system with the aim of ‘rebalancing, re-energising and preserving balances in the living ecosystem’. This is about creating connections between cosmic energy and terrestrial energy using, for example, standing stones. The idea is to study the geobiology of the area, especially the course of the groundwater table, geological faults that can create zones of electromagnetic interference in the environment. Recognising these elements in the earth means that said zones can be detailed in order to restore their balance. Planetary signposts and water memory are also used. So, all of this is about playing with magnetic fields. It’s a bit like performing acupuncture on a vineyard. Frédéric concludes that “the best reward for me isn’t a 99/100 Parker score, but rather that people tell me how my wine acts like a medicine”.

In the cellar, vinification is all natural, with indigenous yeasts for fermentation and sulphur doses of between 0-30mg/L, which can stretch to 40mg if necessary. “If I have any doubts, I prefer to add a little bit of sulphur to be sure”. Since 2010, the domain has made use of over 100 amphora containers, different kinds in order to produce different styles of wine, since each interacts with its contents differently. “These are amazing containers for working with energy since they absorb everything.”

But this project goes even further than the work carried out in the vines and in the winery, seeping into aspects such as the architecture; the measurements of the new winery are based on the golden ratio. The domain’s carbon footprint is compensated twice over by the planting of trees in Madagascar and the installation of solar panels. Frédéric also tells us that Domaine de l’Ecu sponsors schools in the Global South.

Frédéric highlights how his domain functions as a whole with each stage of the process playing its own important role; it’s the combination of all the small details that makes a fine wine. “The use of amphora on its own doesn’t make a good wine, it’s just a container. It’s like at a restaurant, what matters isn’t just what’s on your plate, it’s the intention it was made with, the quality of the service, a smile, everything needed to make it a pleasant moment.”

The domain is one of the founding members of the “Vignes de Nantes” association, created in 2011 and made up of around 10 fine wine makers from Muscadet (including Jo Landron, Luneau-Papin, Jérôme Bretaudeau) who have been working to promote the finesse that can be produced from Muscadet’s terroirs. “It’s unfortunate that many French people see Muscadet wine as a €3 supermarket bottle, they really have a pitiful idea of the appellation. On the other hand, our wines sell much better and for higher prices in place such as New York. The Vignes de Nantes association seeks to update the image Muscadet currently has, and to show that we can make some really fine terroir wines.”

All the cuvées from this domain, from the crystalline AOC Muscadet-Sèvre-et-Maine whites to the Vin de France reds, are closely related to the terroirs they come from. Domaine de l’Ecu wines aren’t widely available, but they still manage to find their way to some of the world’s finest tables: Noma in Copenhagen, Bernadin in New York and Astrance in Paris. And myriad are the enthusiasts keen to bring this domain the merit it deserves…we count ourselves at iDealwine among them!

The domain also produces some original cuvées, for example their orange wines that undergo long macerations (8-10 months), and even long-macerated reds that are easy-drinking with a particular aromatic palette of cacao and thyme.

Even the labels are made with the finest attention to detail, depicting stained glass windows from famous cathedrals.

Domain Castera | Memorable wines from the heart of the Jurançon