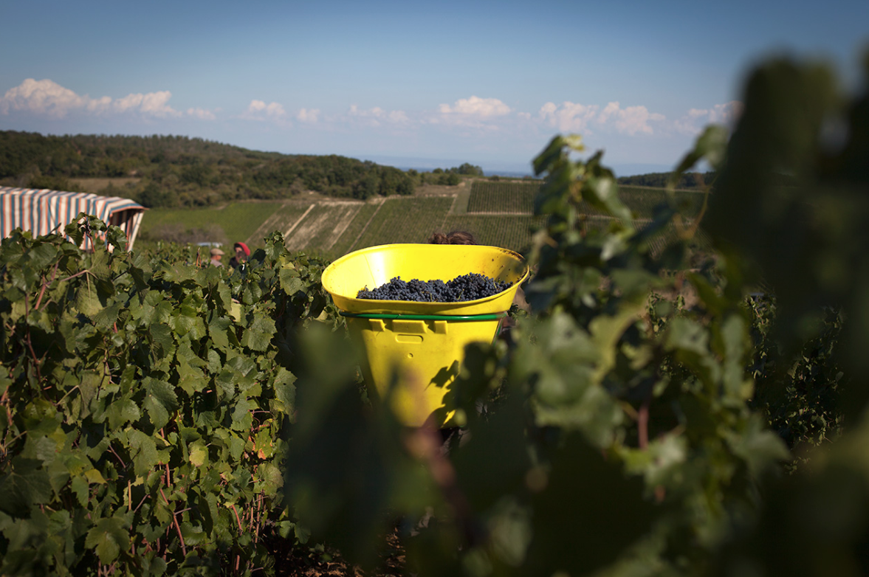 Clos des Vignes du Maynes is one of the most prominent natural domains in the Burgundy region.

Le Clos des Vignes du Maynes has existed since the year 910, the year it was brought into being by the monks of Cluny Abbey. After this, it was owned for a long time by the Lords of Château de Cruzille before making its way through five generations of an agricultural family. Pierre and Jeanne Guillot purchased the estate in 1952, and now their grandson, Julien, manages these seven hectares of land. The vineyards here have never known a drop of agrochemicals or artificial fertilisers; they’ve always been cultivated as part of a natural respect that extends to the earth in general.

From the 1950s, Julien’s grandfather decided to start crafting wines organically, with no recourse to weedkillers or insecticides, and no added sulphur. His father, Alain, then continued to manage the domain with the same philosophy in mind. Going the extra mile, though, Alain contributed at the school of Beaujeu alongside Susanne Michon, Xavier Florin, Pierre Rabhi, and Lydia Bourguignon. He was thus heavily involved and interested in the legislative side of organic agriculture. As President of the Fédération Nationale de l’Agriculture Biologique, he helped to get Philippe Vasseur’s signature – the agricultural minister at the time – for the recognition of the AB logo and its official criteria.

Biodynamics have since become the cornerstone for the work at Clos des Vignes du Maynes. The first preparations were introduced to the vineyard in 1988 when Julien arrived on the scene. These are natural, plant-based concoctions spread on the ground to enrich the soil life. In a similar vein, the harvests are carried out by hand in small boxes to avoid damaging the grapes.

More than anything else, the domain wishes to express its commitment to ‘producing wine as naturally as possible’. Julien aims to make wines that are to be shared; convivial and easy-drinking cuvées. He’s particularly interested in the texture of his produce, as well as its silkiness and its saline finish. To make wine with a lively character, the vinifications are natural, involving native yeasts, and no sulphur, enzymes, or chemical additives in the mix. The wooden vats are rinsed with marc de Bourgogne to awaken the yeast flora. Semi-carbonic maturation then follows for the red cuvées, using a method developed by the three preceding generations, a method that makes way for a very long fermentation. The reds are matured in oak casks before being bottled the following year; the process is completed without any kind of filtration. The white wines are vinified in pure Burgundian tradition, with long fermentation and significant maturing before adding a homeopathic dose of sulphur at the point of bottling.

You’ll find all the wines made by Clos des Vignes du Maynes here, where you can find out even more and taste it for yourself!

Domaine Trapet | A big hit in Burgundy and Alsace

5 tips for enjoying wine this summer

In memoriam | Eloi Dürrbach, a giant of Provence