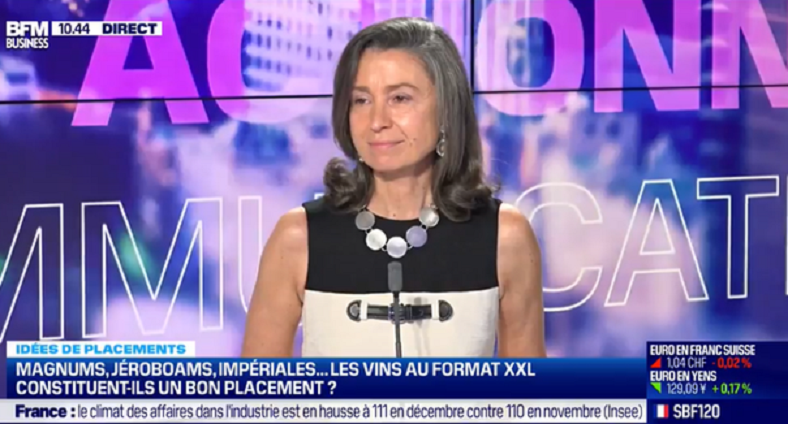 Big bottles are really popular at the end of the year. But with the pandemic still raging on and hesitation around gatherings, you might not have had the chance to open a generous bottle this time. Could you sell it on? And should you actively invest in these larger formats? Angélique de Lencquesaing spoke on the BFM Business channel’s investment segment.

Stéphane Pedrazzi: As someone who follows wine market trends very closely, why have you decided to focus on fine cuvées in large formats?

Angélique de Lencquesaing: Magnums, jeroboams, imperials…almost whimsical names that wine lovers are drawn to for their generosity, their association with sharing and joyous moments, particularly at more festive times of the year. These bottles have an important place at the table, even if gatherings are still a bit more restricted than we might like.

Is wine better for being kept in a bigger bottle?

Yes, in the same way that space is a kind of luxury for us, a wine is much more comfortable in a bigger bottle! It flourishes better, matures gently, and keeps for longer.

However, when it comes to serving, note that anything bigger than a double magnum (or jeroboam, the name changes depending on the region) is a bit trickier and should be decanted.

Alright, so they’re good for drinking and for keeping. But how about buying one as an investment?

Bigger bottles are undeniably a good investment. By definition, cuvées sold by estates in volumes like these are rarer than classic bottles, and rarity is a fundamental factor when it comes to investing.

There is rarity at the point of production, but also in the exchanges made afterwards: in 2020, large formats made up 8% of bottles sold at iDealwine.

But watch out, the cost of making a large bottle (from a double magnum up) stretches the price somewhat. From an investment point of view, if a big wine is sold for under €50, the impact of the bottle itself on the price will be greater. This means it will take longer to become ‘profitable’ as an investment.

Magnums aren’t so rare in Bordeaux, though, are they?

The Bordeaux region does turn out a higher proportion of magnums, and some even bigger bottles. Indeed, this was our most popular selling region for large formats last year, with 31% of these bottles from the Bordelais.

Even here, though, there’s an element of rarity with a bigger bottle, especially when we take into account the effect over time as the vintage becomes trickier to find.

On the auction market, is there a price difference for big bottles that goes beyond a simple multiplication based on volume?

In Bordeaux, this gap does exist slightly (ie. bigger formats have an added value from their size), especially for vintages that are already mature. A 1996 Château Lafite Rothschild, for example, recently went for €1,692 in magnum format, which is a 9% increase on its scaled classic bottle value. For a magnum of 2005 Mouton Rothschild, this increase is 22% (for a hammer price of €1,204).

I imagine the effect is stronger in Burgundy?

For sure. Some of these bottles are already rare in their classic size, making bigger bottles more like collectors’ items. Recently, we had a record hammer price set at iDealwine for a 2006 Echézeaux from Domaine Bizot, the Côte de Nuits signature making waves on the market. Usually, this cuvée in its classic size sells for around €2,000. The jeroboam that sold in December – the equivalent of 4 bottles – didn’t go for just €8,000, but €41,752! There’s a huge value increase for large Burgundian bottles.

So Domaine Bizot isn’t on its own?

Domaine Bizot is a bit of a special case as this vintner has been greatly coveted and was identified as THE up-and-coming phenomenon of 2021. This is because of the estate’s microscopic size and its natural vinification methods.

We have spotted more interest in Burgundy’s fine Chardonnays, particularly in Chablis when it comes to generous bottles. A magnum of Domaine Raveneau’s 2012 Valmur grand cru went under the hammer last month for €1,167, an 88% increase in value when scaled to a classic bottle.

How about the Rhône valley?

In this region, wine growers like to make big bottles of their produce, though quantities are still limited. Unsurprisingly, this includes all the top signatures of the Côte-Rôtie, Hermitage, and Cornas appellations in the Rhône’s prestigious north. A magnum of 1999 Côte-Rôtie from Jamet passed the €1,000 threshold last month (+33% on its classic size value). A 2001 Hermitage from Chave also found great success, selling for €1,032 (+20%). Thierry Allemand’s Cornas in magnum format is another one to watch.

Any more examples of big bottles that are selling well at auction?

The Languedoc region has La Grange des Pères, Alsace has Domaine Trimbach’s Riesling Clos Sainte-Hune, Provence has Trévallon, and the Loire is home to such big names as Clos Rougeard, Vincent Pinard, and Mark Angeli. The Jura is always a region to follow, especially names like Foillard, Lapierre, and Desvignes. All of these have great potential in their large format cuvées.

Absolutely, whether it’s to share with a table of guests or to keep in the cellar, big bottles are a win-win both for your senses and your wallet (at least over time!).

Shop our selection of magnums here

Get a free estimate for your cellar