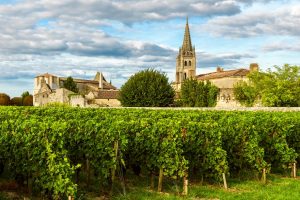 Saint-Émilion and Pomerol are two star appellations within Bordeaux’s Right Bank and although they are both unique, they also have a few things in common. These neighbouring appellations became famous due to the distinct characteristics of their terroirs and their wines. That’s why we recommend that you take a trip to these vineyards just a stone’s throw away from Bordeaux itself to discover the secrets of these renowned appellations.

Two Appellations, One Thing in Common: An Exceptional Terroir

Saint-Émilion and Pomerol both have a slightly hilly topography of slopes and plateaus. However, some small differences remain between these two famous appellations.

Saint-Émilion stretches across 5,400 hectares and rests at the core of nine village territories, in which the Saint-Émilion and Saint-Émilion Grand Cru appellations are tightly intertwined. However, it is important to differentiate between the wines produced within these communes. There are those which come from an area known as the “côtes” (hills), which have siliceous clay and limestone-clay soil, containing molasse deposits, as well as those which come from the “plateau”, where the soil structure contains gravel and reddish-brown clay layered over calcaire à astéries (asteriated limestone). It is within this area of exceptional terroir, on the border with Pomerol, that wines with a perfect suppleness and complexity are produced. They truly are works of art and are known as being the most renowned Saint-Émilion wines.

Pomerol covers a much smaller area of just 800 hectares, extending right up to the plateau of Saint-Émilion and the soil there is composed of gravelly sediments, sand, clay and pebbles. The appellation stretches from east to west and is divided into terraces. An area known as the “clay buttonhole” sets the benchmark within the Pomerol appellation and it is located in the centre, between Petrus and Certan. This gold mine, known as the “Hill of Petrus”, can also be found here and it boasts one of the most impressive concentrations of clay found around Bordeaux. Due to this exceptional terroir, wines with unique characteristics are produced, which is the essence of the most coveted crus of the Bordeaux region.

In short, the terroir in Pomerol is much more heterogeneous and varied than that of Saint-Émilion. Yet, despite their differences, these two neighbouring appellations have one thing in common, which is that they both idolise their favoured grape variety, Merlot, which they grow just a few kilometres from each other. Did you know that Château La Conseillante, the crème de la crème of Pomerol producers, is only 10 minutes away from the famous Château Cheval Blanc in Saint-Émilion? What are you waiting for, get booking your next trip.

A Classification and an Exception

Searching for the Grand Crus of Bordeaux

For lovers of grand vins that are rich, full-bodied and well-structured, go with Saint-Émilion, as the Premiers Grands Crus Classés B are perfect examples of this. For example, try the Clos Fourtet, Château Pavie Macquin or even the Château Canon. Having a wide range of Grands Crus Classés will greatly enhance your cellar, especially if you include wines such as, the Château Côte de Baleau, Château Barde Haut and the Château les Grandes Murailles.

The fineness of the Pomerol crus also makes them a great option, especially those produced by renowned châteaux, such as L’Église Clinet, La Violette, Hosanna or even L’Évangile. We must also not forget to mention gems, such as, Château Gombaude Guillot, Clos l’Eglise and Château Le Gay, whose wines can be stored and kept for later or can be drank straight away…

This wide array of choices causes some dilemmas for wine lovers when it comes to making a decision… So, which will you choose? Saint-Émilion or Pomerol?

Discover the Saint-Émilion wines on iDealwine

Discover the Pomerol wines on iDealwine

Elian da Ros | At the forefront of the Côtes du Marmandais