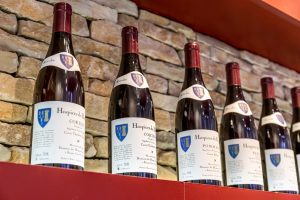 The 3rd weekend in November saw the 162nd Hospices de Beaune auction, an event followed every year by all those interested in wine. The 2022 edition was a year that broke records – nearly 30 million Euros were spent (before tax) and the Pièce des Présidents charity item went for €810,000.

The 162nd auction more than doubled the amount raised last year, which was 12.6 million Euros (before tax). It should be pointed out that the 2022 edition was substantial with 802 lots created from 51 different cuvées up for auction. Substantial but also “better” as Ludivine Griveau, the Manager of Domaine des Hospices de Beaune, described it. The average price of the barrel has also risen to reflect this, standing at €35,974 in 2022, increasing by 8% in one year.

This year, the Pièce des Présidents – the President’s barrel, a special lot sold to support more than charity – contained a splendid Corton Grand Cru like no other. Ludivine Griveau blended three prestigious lots, Corton Renardes, Corton Bressandes and Corton Chaumes, to create this wine that went under the hammer to benefit two charities, Princesse Margot, which supports children with cancer, and Vision du monde, which supports vulnerable children. The houses of Louis Latour and Joseph Drouhin along with the Fédération des Syndicats de Négociants – Eleveurs de Grande Bourgogne (Federation of Wine Merchant Syndicate of Burgundy) bought the barrel for €810,000. This piece was also the chance for the Latour house to pay homage to their president who sadly died in September.

His wife Patricia said, “It’s the most beautiful possible tribute to Louis-Fabrice, my husband, who passed away in September, and to whom the charity piece was dedicated this year. I think it has been successful and I am pleased that Maison Louis Latour and our friends Maison Joseph Drouhin purchased the charity piece together. The fact that other Burgundy négociants joined forces to contribute the remaining €110,000 to make this an absolutely record-breaking price is highly symbolic to me. By doing this, they have shown their support for a cause that means a great lot to Frédéric and I – children in need in France and throughout the world”

Have you heard of Maison Latour?

Shop all our Burgundy wines

Icons beyond France | 5 countries you should have in your cellar