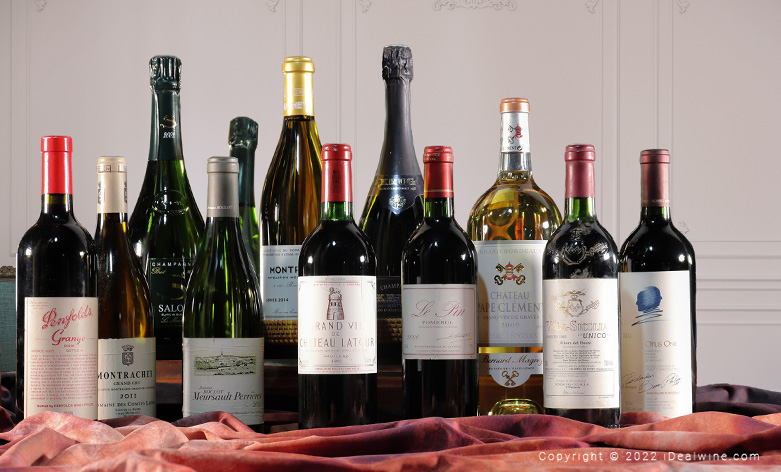 The restaurant La Grande Maison, located in a splendid town house in Bordeaux, was awarded two Michelin stars before closing its doors in the summer of 2020. iDealwine has been chosen to auction the cellar of this prestigious eatery. Here is the story of our meeting with Bernard Magrez on a cool April morning at Château Pape Clément.

The man with forty châteaux

The interview takes place in the living room of Château Pape Clément, a kind of treasure trove in itself, with several musical instruments, a collection of sacred art objects, a letter written by Napoleon from his exile in Saint Helena, a bottle of Château Pape Clément behind glass, a touch of contemporary art… From the outset, this perfectly ordered ensemble says a lot about the personality of the owner: demanding, with a voracious curiosity and an eye for fine trends. For Bernard Magrez is above all a man of action.

As far as the Grande Maison restaurant is concerned, his project to open a gastronomical restaurant in Bordeaux came up against an obstacle. The clientele of a multi-starred chef exists, a priori. But in this region, it is another type of experience that they seek. For the wealthy wine lover visiting the heart of the Bordeaux wine industry, the ultimate goal is to be received at the property, by the owner of course. And if possible, with the family.

Bordeaux has not had a 3-star restaurant since 1934. Bernard Magrez has taken note of this and is now looking to the future. This luxurious residence will henceforth host high-flying seminars, offering participants a variety of experiences combining tastings, courses in blending their own wine, visits to cultural areas, and helicopter flights over the properties: the owner’s imagination knows no limits.

Focus on the regions

Let yourself be inspired before you set out to bid on these beautiful lots. From Bordeaux, you will find both properties of the entrepreneur (Châteaux Fombrauge and Pape Clément) and grands crus from the 1855 and Saint-Emilion classifications. Drawn to the right bank’s fruity wines? We recommend Châteaux Cheval Blanc, Ausone and Angélus. Do you prefer the power and ageing potential of the Médoc? Go for its icons: Lafite-Rothschild, Mouton-Rothschild, Pontet-Canet, Cos d’Estournel. The Graves region isn’t found lacking in prestige, as evidenced by Châteaux Haut-Brion and Smith-Haut-Lafitte. Finally, whether you are looking for an on-trend wine or a meditative nectar, you are spoilt for choice: Yquem, Sigalas-Rabaud, Doisy-Daëne, Closerie des Moussis, Clos du Jaugueyron and Clos Puy Arnaud all feature in this private collection.

What would Burgundy be without its emblems? Here are included some of its proudest prodigies, the domains of Romanée-Conti, Arlot, Coche-Dury, Méo-Camuzet, Bonneau du Martray, Dujac, Dugat-Py, Eugénie, Comtes Lafon, Jacques Prieur, Leflaive, Roulot, Dauvissat and Liger-Bélair.

From the Rhône, we recommend the various Condrieu wines of Georges Vernay (Coteaux de Vernon, Les Chaillées de l’Enfer, Terrasses de l’Empire…), the white 2015 and red 2014 Châteauneuf-du-Pape from Beaucastel, and the Côte-Rôtie wines of Clusel-Roch and Jamet (1998 and 2012, Côte Brune 2004). Something more accessible? The Côtes-du-Rhône of Charvin and Domaine du Coulet aren’t quite so far-fetched.

Other French wine regions make an appearance in this impressive Private Collection. Champagne, first of all, stands out with Roederer’s 2008 Crystal, various vintages and a sumptuous P3 1971 from Dom Pérignon, as well as a few bottles from Drappier and Selosse. The Languedoc is not to be outdone, as you can imagine. Grange des Pères, Petite Sibérie du Clos des Fées, Mas Jullien, Montcalmès, Coume del Mas, Peyrus, and Clos Marie are just some examples. The same is true of Provence, here representing the best of the south with estates like Hauvette, Tempier, Trévallon and Château Simone. We also have the Jura where Tissot awaits, the Beaujolais with Marcel Lapierre and Jean Foillard, Alsace where you’ll find Trimbach, Weinbach, Deiss and Humbrecht or, more discreet, the Jurançon, with the divine work of Camin Larredya.

Wines from beyond France also find themselves in the spotlight, with cuvées from Tenuta San Guido (Sassicaia 2011) and Angelo Gaja (Barolos and Barbarescos). In Spain you’ll discover different vintages of Unico from Vega Sicilia. And last but not least, from Germany, Egon Müller, Joh. Jos. Prüm and Donnhöff are all waiting for your bids.

You can explore the full auction here

Discounts on certain wines at iDealwine

Jura and Savoie – the hidden gems of French wine